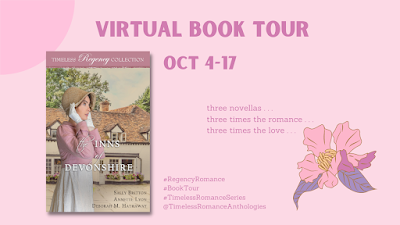 Welcome to my tour stop: excerpt from the newest book of the Timeless Regency Collection, The Inns of Devonshire! I have been reading the previous books in this series to get caught up and eagerly anticipating this newest offering. But you don't have to; each book and each novella is a standalone story. Keep reading for your exclusive sneak peak!
*    *    *

Sitting at the window of the Seventh Star Inn looking out into the street, Collin puzzled over the woman he had met briefly only moments before. Window boxes full of flowers were beneath every window of the inn and the building across the street—not the most practical thing he had ever seen but eye-catching. Charming even. And the buildings appeared in good repair. No cracked glass or loose shutters caught his eye.

A hand tugged at his elbow. “Papa, can we go down to dinner now?”

Collin looked down into the blue eyes that matched his own, lifting both eyebrows at his impatient offspring. Elizabeth Maria Stonecroft, his only child and greatest joy, stared back with narrowed eyes. He managed not to laugh, schooling his features into an authoritative frown instead. “Beth, what have I said about patience?”

“That it is a virtue every young lady ought to possess,” Beth answered without hesitation or conviction, sounding much older than her ten years. “You’ve also said a young lady ought not to gawk at things in the street, and that is precisely what you are doing, Papa.”

He chuckled and held his hand out to her, and she put her slim fingers in his own. “This is very true. I suppose eating dinner would be better than gawking.”

Though he had hoped to catch a glimpse of Miss Baxter once more. He had left her abruptly when he’d spotted Beth waving to him urgently from the window of his room. He’d thought she needed him, but she had only wished to show him the view from her window to the river.

Mrs. Hatcher had appeared shortly after their arrival to welcome them both and tell them all about dinner that evening. She and her husband had been remarkably kind, despite his unannounced appearance. They were among many of his new tenants who likely found themselves curious about him and his intentions for their homes.

He pushed aside the squirming discomfort that came with the knowledge that the livelihoods of several families, even dozens of people, were now tied up in his ability to make sound business decisions.

Collin gave his arm to Beth to escort her down to dinner. As they left their suite of rooms, she looked up at a painting hung in the hall and a bouquet of flowers sitting in a bowl of water just beneath it.

He nodded his agreement and took in the high ceiling and whitewashed walls of the inn with relief. Everything appeared perfectly clean, with modest-sized paintings and a handsome stag’s head clear of dust. Windows high above let in the sunlight and warmed the atmosphere pleasantly. “Indeed, the inn is obviously in good repair.”

Mr. and Mrs. Hatcher waited at a table to eat with them, a sign of hospitality, while their staff members served their table and another with two gentlemen who were staying at the inn as well.

Beth’s most important question burst from her mouth after they were seated at a table in the main dining room, her eyes on Mrs. Hatcher. “Are there other children nearby?” She leaned forward in her chair, darting a quick glance at her father. “Or a garden or someplace where I might play?”

Collin put his hand on her shoulder, his smile trying to come out again. Instead, he cleared his throat, then met Mrs. Hatcher’s curious expression. “We lived in London before this, and Beth did not have many opportunities to socialize with children her age.”

They had lived in a poorer neighborhood with few children underfoot. Most were sent to the country, to boarding schools promising fresh air for a shockingly low monthly fee, or were expected to apprentice themselves or work with their parents.

Collin had visited a few of those country schools, and they only made him more loath to send Beth away than before. The low fees were as promised. The accommodations were not at all acceptable. He couldn’t afford the more expensive schools in the country, and he wouldn’t send his daughter away from him unless her circumstances would be better than at home.

“We have a few children always running about,” Mrs. Hatcher answered, looking to her husband as she spoke. “But I cannot say which would be the most suitable companions for you, Miss Stonecroft.”

GET YOUR COPY HERE:

Posted by lyssa armstrong at 7:00 AM 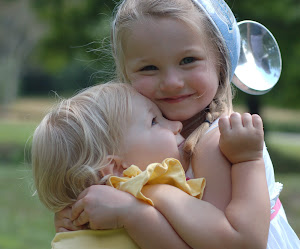 I am currently accepting YA, Sci-Fi/Fantasy, and Christian books for review. I also love to do interviews, guest posts, giveaways, and participate in blog tours. Send inquiries to: Lyssa73@hotmail.com.

9-10 Stars: Reserved for absolute favorites, must-haves. Will own, read again and again.
7-8 Stars: Great book with a few flaws.
5-6 Stars: Okay. Get it from the library.
3-4 Stars: Pretty bad. Was frustrating to read.
1-2 Stars: Horrible. Not worth your time.
0 Stars: There is nothing redeemable in this book.

Hearts Made Whole
by Jody Hedlund

When Godly People Do Ungodly Things: Finding Authentic Restoration in the Age of Seduction
by Beth Moore